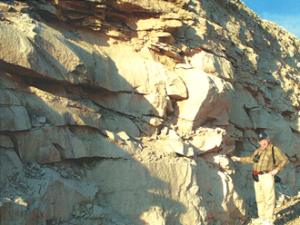 The seeds of BioGreen Technologies were planted in 1961, when a young Polish geologist named Dr. Jan Krason was first introduced to natural zeolites while working on a project in what was then East Germany. His interest in natural zeolites remained strong, particularly as scientific research from Russia, Europe, Israel, the US and Japan began to demonstrate how zeolites’ unique properties can provide a wide range of agricultural benefits. Always on the lookout for potential deposits, it was not until 1990 that Dr. Krason became actively involved in acquiring natural zeolites on a large scale.

In that year, he discovered large natural zeolite deposits in central Mexico while working on a limestone-mining project. It took nearly tens years for him and his Mexican partner to acquire the necessary mineral rights for over 1,200 acres of land containing over 100,000,000 tons of natural zeolite. Subsequent mineral analyses conducted in Mexico and the US showed that the deposit was exceptionally pure, with the proportion of clinoptilolite zeolite in the 60-90% range. Significantly, this clinoptilolite zeolite is relatively high in potassium (K, an important plant nutrient) and low in sodium (Na, which in high concentrations can be toxic to plants).

Dr. Krason became keenly interested in large-scale zeolite applications for CAFOs after discussions with a local (Mexican) dairy farmer who lives near a large outcropping of natural zeolites. Since the 1990s, this farmer has been supplementing feed for his 300 dairy cows with clinoptilolite at about 0.5 kg (~ 1 lb) per day, per cow. He also spreads zeolite on the pen floor at about 10% of the estimated total manure volume for that production cycle, which successfully suppresses odors in the dairy confinement area. The manure-zeolite mixture is then collected, put in piles, and composted with red earthworms. The composted manure is then sun-dried, screened for large lumps, packed locally and sold as a natural organic fertilizer. Since using zeolite, the farmer has no longer retained a veterinarian because his cows are so much healthier. This farmer and other users of the zeolite-composted manure have realized substantially greater crop yields while also saving money on water purchases due to more efficient irrigation. According to the dairy farmer, the salable value of the composted manure can equal or exceed the value of the very high volume of milk produced by his farm. He continues to be both very happy and prosperous, thanks to his use of natural zeolite.

Dr. Krason is founder and president of GeoExplorers International, a geology and mining consulting firm in Denver, Colorado that is now more than 30 years old. In 2000, Dr. Chris Knud-Hansen, a freshwater ecologist, joined Dr. Krason’s efforts to study and promote natural zeolites for CAFO feed additives and manure management. Their preliminary efforts laid the foundation for the large-scale application of zeolite, but the timing was not yet right. And with the death of Dr. Krason’s Mexican partner, mineral ownership issues developed and the project was put on hold for several years while Dr. Krason pursued other geological interests and projects.

That changed in 2011 when Dr. Krason had a chance meeting with Mr. Jorge Oteo through a mutual acquaintance. Mr. Oteo, now president of BioGreen, had the experience within the mining community and the understanding of the Mexican business culture to recognize the investment opportunities Dr. Krason’s zeolite holdings could provide.

Dr. Krason encouraged Mr. Oteo to join him in pursuing the large-scale agricultural applications of the natural zeolite deposits he had discovered in Mexico. In response, Mr. Oteo founded BioGreen Technologies. BioGreen now owns the extensive zeolite holdings discovered by Dr. Krason, and has assembled a team that includes an expert in the cattle and dairy industry, an expert mining engineer in Mexico, a senior geologist in Mexico, Dr. Knud-Hansen with his expertise in environmental protection and agricultural applications, and several senior technical advisors with extensive experience in the water and agricultural industries. Of course, the most important technical advisor for BioGreen is Dr. Krason, whose extensive knowledge acquired over more than 50 years, and his 23 scientific publications specifically related to natural zeolites, makes him one of the world’s most recognized and highly respected authorities on natural zeolites.

The photo to the right shows BioGreen President Jorge Oteo (on the right) at BioGreen’s concession with Mr. Manuel Lozano, BioGreen’s mining engineer in Mexico. As shown in the photo, there is no overburden making BioGreen’s zeolite mining more analogous to a sand and gravel operation, except that water is not needed for mineral extraction.

Since 2011, BioGreen has been conducting the necessary transactions, permitting, and other processes required in order to acquire ownership of Dr. Krason’s natural zeolite holdings, as well as some additional claims in the region shown to contain similarly high-quality natural zeolites. At the same time, BioGreen has established collaborative relationships with several universities, met with various state and local agencies associated with the cattle and dairy industries, and continues to study the agricultural applications of natural zeolites.

This website summarizes the entire enterprise, including the important uses of natural zeolites for remediating the environmental impacts of CAFOs, increasing efficiency and profits for these farms and surrounding agricultural fields, and all the relevant scientific research – and clearly indicating that the time is right for natural zeolites to make a significant impact on CAFO management and environmental protection.

A native of Mexico City, Mr. Jorge Oteo has dual Mexican/U.S. citizenship, is bilingual in Spanish/English and understands and interacts very well in the Latin American business culture. He has extensive international experience as a business development executive, including having recently promoted and sold a Mexican copper mining project to China Minmetals Corp., one of the world’s largest metals traders. His positions include International Commercial Officer for United Bank of Denver, VP and Branch Manager for Rothschild Financial Corporation of Denver, and Sr. V.P. and Business Development Director for American International Depository & Trust, Denver. Mr. Oteo has raised over $12 million in private capital for startup companies, and managed the purchase of 30,000 acres in Mexico, during which time he secured a financial partnership of $1,000,000 with the Mexican government. As the founder and President of Prizma Industries, Denver, he managed a staff of 60 and negotiated over $7 million in equipment purchases in Germany, Mexico, and the U.S. Mr. Oteo is a Director of the non-profit Emergency Family Assistance Association in Boulder. He has a Bachelor of Science degree in International Business and an MBA in Finance and Real Estate from the University of Colorado, Boulder.

Dr. Chris Knud-Hansen brings to BioGreen scientific and real-world expertise in the beneficial use of clinoptilolite zeolites for both agricultural and aquatic applications. Dr. Knud-Hansen is a limnologist (freshwater ecologist) and recognized expert in nutrient management in aquatic systems, bio-statistics and experimental design, water quality analysis, and warm-water aquaculture. He has authored over 30 peer-reviewed scientific articles, one book, and has presented original research at international scientific conferences since 1982. Research interests have included the use of natural zeolites for aquaculture and agriculture applications. Dr. Knud-Hansen is a former Director and past president of the Colorado Lake and Reservoir Management Association, a former Regional Director for the North American Lake Management Society, and is a Certified Lake Manager. He has served on the faculty of the National University of El Salvador (with the Peace Corps), Michigan State University, the Asian Institute of Technology (Bangkok, Thailand) and the University of Colorado, Boulder. His formal education includes a B.A. degree in Biology from Gettysburg College, a M.S.P.H. degree in Environmental Sciences and Engineering from the University of North Carolina, Chapel Hill, and a Ph.D. degree in Limnology/Ecology from the University of California, Davis.

Dr. Krason is recognized as one of the world experts on natural zeolites. Dr. Krason founded GeoExplorers International, Inc. in Denver, Colorado, in 1974. GeoExplorers is a highly professional, internationally renowned consulting firm serving corporations, institutions, investors, and international governments and organizations. Dr. Krason was the discoverer of the Mexican zeolite deposits now owned by BioGreen Technologies, Inc. Dr. Krason graduated from the University of Wroclaw, Poland with both a Master of Science and a Ph.D. degree in Geology. He worked at the university as a research scientist and associate professor from 1956-1966. Dr. Krason has been a project geologist in Egypt, and served as an expert and advisor to the Kingdom of Libya. He has over 50 years of worldwide professional experience in over 70 countries and has authored and co-authored over 100 scientific publications.

Jesus Alba has been the founding partner and General Director of the mining consulting firm of Adminas, S.A. de C.V. since 1997 and has worked extensively for many years with BioGreen’s President, Jorge Oteo. A graduate in Geological Engineering from Instituto Politecnico Nacional, Mexico, D.F., “Ayax” is very well known and widely respected for his expertise with various minerals and his past employment with numerous US oil and mineral companies, including Phelps Dodge and Anglo-American. In addition, Mr. Alba has taught geological engineering at his alma mater.