Nitrogen comes to CAFOs in the form of animal feed as proteins and other organic ingredients. However, only about 10% of the feed-nitrogen remains in the animal – the rest is excreted as manure and urine. Nitrogen losses arguably represent the most significant sources of environmental contamination from CAFOs and agricultural fields. Nitrogen can leave the CAFO farming system in two primary ways: airborne and waterborne.

Airborne nitrogen losses: Ammonia-nitrogen (NH3-N) volatilizes quickly under saturated conditions, allowing ammonia to be windblown away from the CAFO. These conditions develop quickly, as evidenced by the strong ammonia odors emanating from animal pens and feedlots, as well as from agricultural fields that receive untreated manures.

Animal-generated ammonia released into the air not only creates a respiratory health hazard for both animals and CAFO operators, but ammonia’s noxious odors also impair the quality of life of the surrounding community. Property values can suffer in communities downwind from CAFOs and create negative economic impacts regionally.

Another environmental issue associated with airborne losses of ammonia from CAFOs is when ammonia is transported to sensitive or fragile ecosystems. A good example is the potential negative impact on Rocky Mountain National Park (RMNP) from cattle feedlot operations in eastern Colorado. Weld County, situated approximately 50 miles from RMNP, has the highest number of cattle and dairy cows of any US county. The Colorado Department of Public Health and Environment recently determined that 92% of Colorado’s ammonia emissions come from livestock and agricultural fields. If transport and deposition of this ammonia is left unchecked, RMNP’s otherwise pristine lakes may become unsuitable for native trout as aquatic ecosystems degrade due to excessive nitrogen inputs.

Waterborne nitrogen losses: Although it’s a gas, ammonia nitrogen is highly soluble in water. Ammonia is released from water as a gas when ammonia concentrations exceed saturation, as demonstrated by the noxious ammonia odors around CAFOs. Ammonia in water is also utilized by nitrifying bacteria that can convert/oxidize high concentrations of ammonia into high concentrations of nitrate (NO3-) via a microbial process called nitrification.

This nitrification of ammonia to nitrate is very important ecologically. Nitrate’s high solubility facilitates nitrate losses from CAFOS and agricultural fields through leaching into groundwater and surface drainage. High nitrate concentrations in wells and reservoirs can be problematic for water providers when they exceed drinking water safety limits.

Enormous nitrate losses from CAFO/agricultural surface drainage are also largely responsible for the large-scale eutrophication of the nation’s waterways. Nitrogen, together with phosphorus losses, 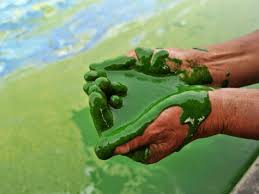 promotes toxic cyanobacteria (blue-green algae) blooms and other excessive plant growth that create pea soup conditions in receiving rivers, lakes, and reservoirs. While they are effective crop nutrients, these pollutants are also excellent food for algae. When excessive algal growth dies and sinks to the bottom, oxygen depletion can occur in bottom waters creating hypoxia “dead zones,” as documented in the Chesapeake Bay and the Gulf of Mexico.

Including natural zeolites in both animal feeds and animal bedding can effectively sequester nitrogen and minimize its losses from CAFOs to the atmosphere, groundwater, and surface water drainage as well as from agricultural field runoff. This “upstream” approach of on-farm nutrient retention and management is critical for farm ustainability and the protection of the surrounding ecosystem.