Animals raised in confined pens spend much of their time standing and/or lying down in the same space where they defecate and urinate. They are also breathing high concentrations of toxic gases released during manure decomposition, including volatilized ammonia (NH3) and hydrogen sulfide (H2S). These gases also produce the noxious odors characteristic of CAFOs that can also cause respiratory ailments in CAFO employees. 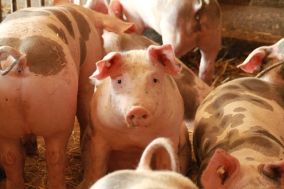 can become saturated and matted very quickly, while sand may provide some relief until it too becomes saturated.

As a result, inadequate bedding is the cause of many illness associated with CAFOs, for example:

Once animal manure hits the ground, the associated odors are a testament to the immediate release of ammonia (NH3) into the air. Using natural zeolites as “livestock litter” is analogous to the growing commercial use of natural zeolites as premium cat litters and for aquarium management: that is, to absorb unwanted/toxic/odorous NH3 generated by animal waste products.

The basic methodology is to spread granulated natural zeolite throughout the pens before stocking them with animals. The total amount of zeolite initially required should be about 5% of the estimated total wet weight of the manure that will be generated during the animal production cycle in that confined-animal pen. In other words, enough zeolite to make it through the production cycle between pen cleanings. The animals’ hooves will constantly mix the manure into the zeolite floor as manure is produced. The amount of zeolite required for the animal production cycle will depend on the intensity of the odors and the frequency that the pens are cleaned. Over successive cycles, the farmer will develop a good idea how much zeolite is required for individual pens and stalls.

Furthermore, zeolite’s hollow honeycomb structure enables it to absorb up to 70% of its weight in water, making it extremely effective at absorbing excess moisture in the manure. The retention of water allows for more rapid drying and composting, which diminishes N losses through leaching and runoff from feedlots. Zeolite’s ability to sequester ammonia through cation exchange also diminishes ammonia volatilization (and the associated noxious odors) and nitrification to nitrate. These attributes greatly reduce potential environmental risks of accidental failures, such as large manure spills into streams.